Many say exploration is part of our destiny but it’s actually our duty...

For fifteen years I have bred and shown the Siberian Cat. Imported to the UK from all over the world in 2002, I began my cattery in 2005 under the mentorship of Lorraine Brown (Koolblue), one of the original importers of the Siberian into the UK.

During my time as a keeper of this amazing feline, I have often been asked about the 'Neva Masquerade'. For my first sharing of knowledge with you, I have posted an article I wrote for a group in 2020. Enjoy...

The argument for the Neva Masquerade Siberian – is there a ‘point’ or is it all fake news?

Before we begin, there are two things you might need to know. The first is this, the ideology of a pure breed cat – as opposed to a pedigree cat - that which has a paper trail of ancestors recoded in a cat registry somewhere on the planet - is just that, a myth or legend promoted, in this case for economic gain.

Secondly, a ‘cat’ is a ‘cat’; apart from the few breeds such as the Bengal which has been crossed with a separate species of cat, in this case the Asian Leopard Cat (Felis Bengalensis), all domestic ‘breeds’ are the same genetically and are often referred to as the ‘domestic cat’ , Felis silvestris catus.

History of the Siberian Cat.

"On the 16th of September 1989 a group of breeders from Leningrad and Moscow applied for the registration of the Siberian Cat to the SFF, established in April of the same year. The breed is registered on August 6, 1990 (Certificate number 1). At the same time the colourpoint Siberian Cat is registered as a unique color variety of the Siberian with a second name "Neva Masquerade" (Certificate number 2)”.
Dr. Irina Sadovnikova, WCF Int. All Breed Judge 2008.

You would at this point be well to note the words separate ‘color’. So why did this happen? A high proportion of the foundation cats accepted as the Siberian Cat were colourpoint, hence the need for the separate division for showing.

According to dialogue passed through the early breeders, a small group of individuals did not want the colour-point colour at all, sadly a division that has resulted in many an hour of wasted argument instead of promotion of this wonderful cat. Cat registries such as the WCF – the precursor of the GCCF breed standard for the Siberian accepted all colours except cinnamon and chocolate. TICA is a genetic registry so accepts all domestic cats can be all colours, so includes cinnamon and chocolate.

Colour genetics:
Here we need to digress into the genetics of colour. If you know all this skip to the next section, if not, hold onto you hats.

Here is a beginners explanation of colour genes and interactions. GCCF

If you got that, well done!

How does this apply to the Siberian Cat? Well you can see that only the black gene was adopted at inception. However, all the modifiers were accepted: dilute – blue, cream; red; colourpoint (nicknamed the Neva Masquerade – another romantic notion); silver and golden – although little is known about any silvers in the population at inception, the colour appearing later in registries, particularly in the US.

So, except for the certificate numbers separating the show classes – which was continued in FIFe but not WCF; TICA has separate colour divisions for all colours - the colourpoint was only ever defined as a separated breed by FIFe in 2011. Apart from this show classification, there is no evidence for a separation as a ‘breed’.

Some ideologists argue that the colourpoint was a result of ‘added’ genes; of course, this is nonsensical. You may need to know that the Siberian Cat did not fall out of the sky when Perestroika gave the Russian people the opportunity to show and sell ‘pedigree’ cats (lots of US $ here). Cats had populated the country for thousands of years, and although prevented from trading in ‘posh’ cats and indeed keeping cats when food was scarce, cats may have been donated to officials or carried via shipping lanes during the ‘closed’ years. These cats would have been a factor in the development of the cat we know as the Siberian. The concept of ‘The Siberian Cat’ did not exist before 1986.

As all domestic cats are ‘cats’ then all ‘cats’ have the potential to carry any of the colour modifier genes. Indeed, a high proportion of the foundation cats were colourpoint, hence the division for colour.

even to appear as a full colour in the twilight years with the added addition of those beautiful blue eyes.

As a breeder of the Siberian Cat and having a particular fondness for the colourpoint or Neva Masquerade, it should be noted that a good quality Neva should have a coat as strong as a full colour which will darken over time; even to appear as a full colour in the twilight years with the added addition of those beautiful blue eyes. This sets it apart from cats recognised as ‘the Birman’ or ‘the Ragdoll’.

Regarding the ‘new’ colours of cinnamon and chocolate, these genes would have been present in the foundation population. The breeding programme in Germany which re-introduced the gene via a chocolate Birman and a Somali was instigated with the agreement of a breed club and continued under strict regulation. There are now many catteries, particularly in Germany who contain these colours. These colours can be registered with TICA. Showing of these colours as far as I am aware, is still confined to Germany.

So, I will leave it to you to decide. But remember, logically, if you were to separate the colourpoint as a breed on the basis of a colour modification gene, you would have to reclassify other colours such as blue, red and particularly due to lack of documentation and the nature of the inhibitor gene, silver and golden. As silvers are highly marketable it would seem a separation thus would not be forthcoming anytime soon. Instead, let us focus on health and type, colour a bonus; the delight in peeking into the nest to see the rainbow of colours and patterns but above all, healthy kittens.

As I am always open for rational discussion and updated material about the Siberian Cat, please feel free to contact me and share ideas. 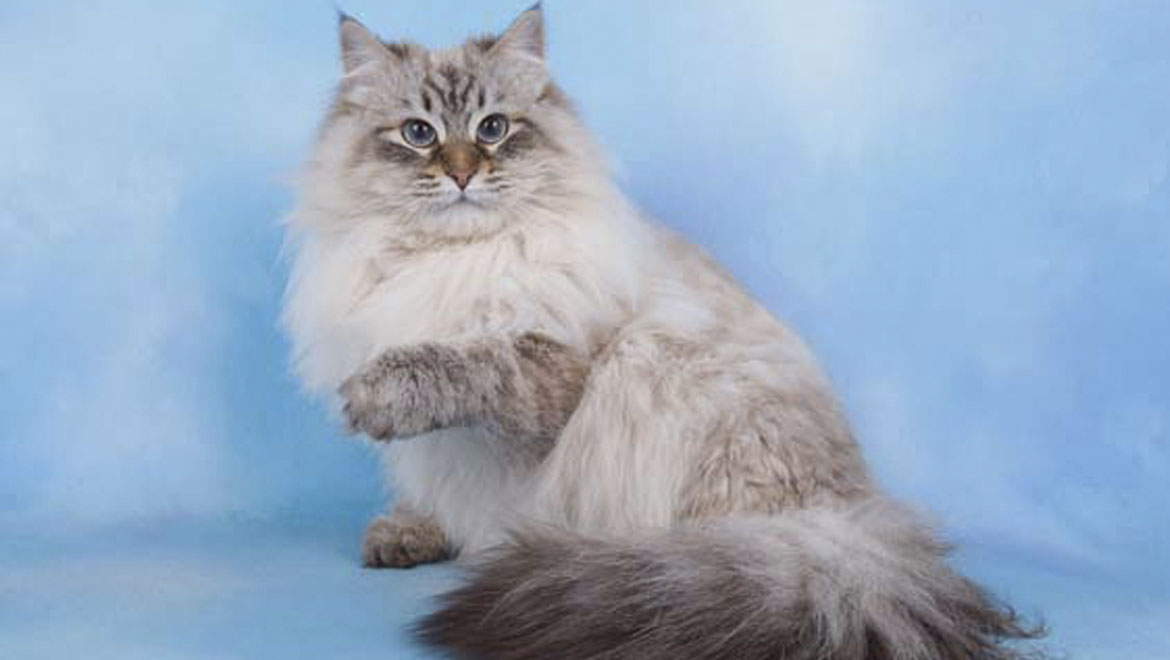